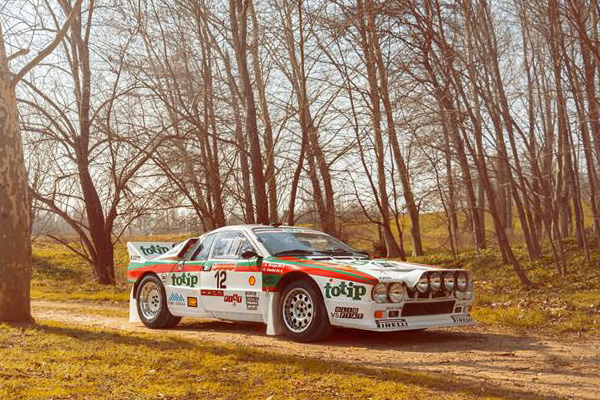 The Lancia Rally 037 of Claudio Covini and Andrea Brega, one of the icons in the poster of the 65th edition. Photography: Fresh Imports – Rodrigo Yufe

The first test of the European Historic Rally Championship, to be held from 24th to 25th of March in Girona, opens the registration process for the categories of Speed, Regularity and Legend.

The 65 Rally Moritz Costa Brava will start at 6pm on Friday, March 24th, from the podium set on Ramon Folch Avenue in Girona. The first stage will consist of three timed sections: ‘Santa Coloma-Cladells’ (14,40 km), ‘Sant Hilari-Osor’ (12.57 km) and ‘Els Ángels’ (15.68 km), finishing at 10pm in La Copa parking, where the cars will have the ‘parc fermé’.

The second stage, in full daytime, will start at 8:30p.m, on Saturday 25th, and participants will face three different stages: ‘Osor’ (12.23 km), ‘Collsaplana’ (25.06 km) and ‘Cladells’ (14, 20 km), with three passes on the first two stages and two on the third, ending the rally at 8pm in La Copa parking after just having crossed the podium of Ramon Folch avenue.

In total, the inaugural test of European Historic Championship will consist of 557.99km of which 182.92km will be Speed, distributed in the 11 sections mentioned above, 32.78% of the total mileage. All service parks will take place in Domeny-Fontajau. The rally office will be settled at the Hotel Gran Ultonia.

The enrollment of European teams is an inherent aspect of the rest, due to its internationality and its good reputation among drivers ands teams. The labour of promoting the rally throughout the continent is giving such important results that they can lead this 65th edition to be the most outstanding one since the test is exclusively dedicated to historical vehicles.

The 65 Rally Moritz Costa Brava has the essential collaborations of the Girona City Council, Girona Provincial Council and EsportsCat of the Generalitat de Catalunya. Moritz beers is the main sponsor and among the collaborators there is the support of Ultonia, Xternalia, Garatge Internacional, 9Onze, Classic Cover, Suprametal, Grupo CMMC-Xerox and Blunik. As Media Partners, the rally counts with Sport and Auto Sport Hebdo.